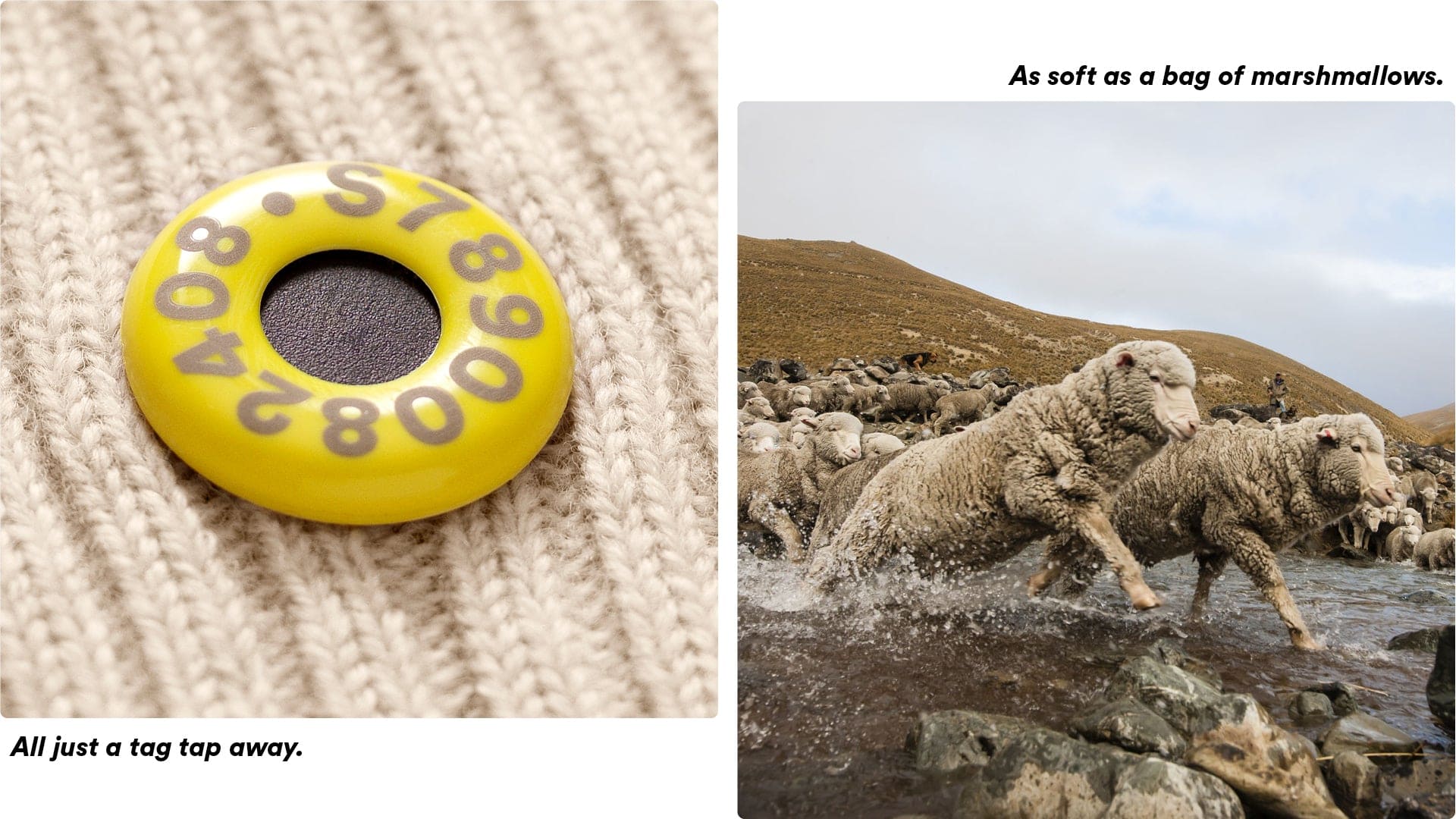 Who is Sheep Inc.

Based in London, UK, Sheep Inc., short for Sheep Included, is the first carbon-negative fashion brand. Founders Edzard van der Wyck, Michael Wessely and Gavin Erasmus embrace the idea to revolutionize the apparel industry in a hope that every Sheep Inc. product can spread the message of sustainability to as many as possible.* To do this, they work with suppliers with the same business philosophy from carbon-neutral farms to manufacturers who run on green energy. Sheep Inc. has evaluated all sources and uses premium Merino wool from Merino sheep living in New Zealand. This natural and biodegradable fiber is thinner and softer than regular wool and it is comfortable next to the skin and durable to withstand constant wear. After the raw material is cut from a sheep, it is further processed in a solar power factory, leaving zero waste and carbon footprint. Sheep Inc. is truly the pioneer to take environmental responsibility in the fashion industry. 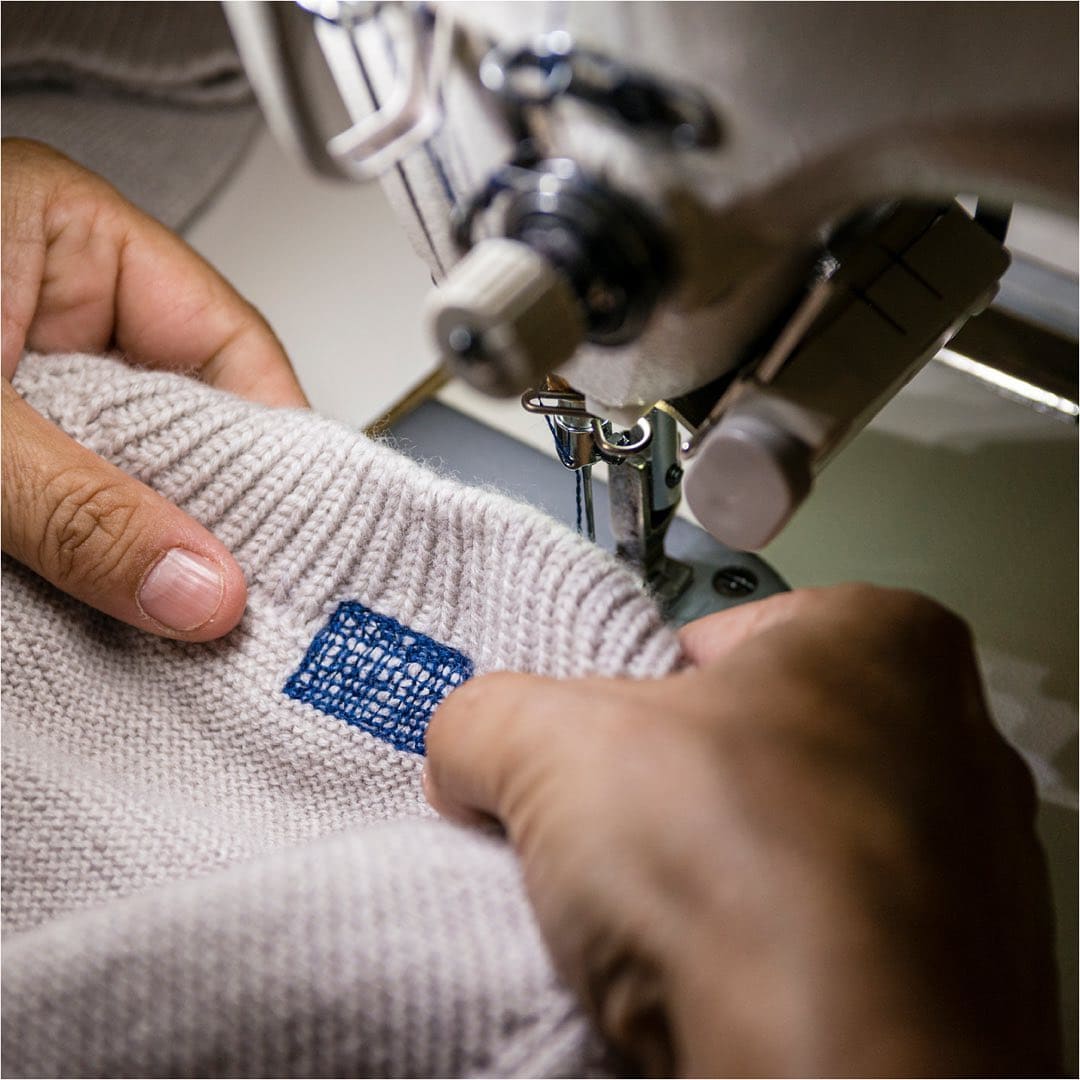 Fast fashion has been a trend that changes the way we consume clothes which are mass-produced to meet people’s insatiable appetite, making the garment in your wardrobe have a shorter and limited lifespan when the newer and more stylish design is created. A 2021 report from the World Economic Forum said fashion and its supply chain, as the third largest polluter, releasing 5% of the world’s greenhouse gas emissions generated from raw materials to production and the processing of shipping to a customer’s hand. Let’s take a closer look at the material used to create a garment. The synthetic fibers, composing 65% of clothing, come from fossil fuels. Nearly 3.5 million barrels of crude oil are used each year in production.* On the other hand, the recycling and reuse of the textile is too slow to catch up with the consumption, making most of the discarded clothes end up in landfills. And burning of them leads to another factor that exacerbates global warning when more toxic substances are released to the atmosphere. Due to this, textile production has then undoubtedly contributed to climate change.

THE ACTIVITY WAS CHALLENGING, REQUIRED A HIGH LEVEL OF INNOVATION, AND DIRECT ACTION AND/OR EXTENSION TO ACHIEVE THE PLANNED OUTCOME

Following a road not yet made

The use of polystyrene packaging is endemic across the world. Moving any business, including those in the seafood sector to new environmentally sustainable packaging requires a cost effective equal. To meet this need, Tom and Kath had to venture into uncharted territories of packaging design and manufacturing. The challenges included finding lightweight materials that could be re-used and recycled and which would provide equivalent or better thermal performance than polystyrene for transportation and storage of temperature sensitive goods such as seafood. The resulting TomKat KoolPak® consists of three unique components which have been individually designed to work as one unit: the frame, the interior, and the technology. The relationship between the three components plays a vital role thermally and in delivering many other desirable benefits. This is critical to protect goods against periods when they might be left out of the cold chain as they travel to market, such as time spent on the tarmac waiting to be loaded into planes.
Read More

It is never too late to make a change to ensure clothing is durable and not disposable when a new business model is introduced to shift this trend. To make this happen, new technologies can bring the concept of circular economy from production to consumption into real shape when information on how the garment is created is accessible for the manufacturer and the customer. RFID can act as the enabler to realize the ambition to make a difference. This communication technology happens between a reader which generates a magnetic field from its antenna and a tag that can gain its power via coupling both in the proximity. Therefore, an RFID tag can be a battery-less device – small in size and cost-effective. Moreover, the value of RFID comes from each tagged item bearing an ID number so that data acquired facilitates the formation of an ecosystem that all parties involved can benefit from. That is to say, an RFID tag records all events during the production journey which gives visibility for the manufacturer in supply chain management. Meanwhile, consumers can get the information by their NFC-enabled phones to learn about the production history of their purchases. The brand owner can build a positive image in their marketing campaigns when a customer knows he/she is buying from someone who cares about the environment.

Your knitwear Can Tell You a Story

On the technical side, they make all the production process traceable with the help of Near Field Communication (NFC), a contactless communication technology using a radio frequency field based on 13.56MHz. NFC has been widely adopted as an effective tool for product authentication and customer engagement to a retail brand. Attaching an NFC tag to an item helps connect it to the digital world. Each Sheep Inc. knitwear features an NFC tag on the hem from day one and has always been part of the brand. Seritag, a professional NFC Tag supplier in the UK, provides the encoding service to the tag with a unique URL which will open up information by tapping an NFC-enabled phone. This allows the customer to get details of its manufacturing journey, namely the farm each batch of wool comes from and updates on the wellbeing of sheep providing the wool. The wearer can even be informed via push notifications when the sheep is being sheared and where it is. The way Sheep Inc. engages with customers encourages them to consider the life cycle of a garment and brings the idea of sustainability as a tangible thing in the fashion industry.

The KoolPak App uses NFC & block chain technology to track each KoolPak through its entire lifecycle, in partnership with SAG we have further developed battery-less NFC Temp Sensor Tag to suit our application, so clients can prove the provenance of their product, be confident in the safety and freshness of their consignment and avoid the added expense of food waste. All you need is a mobile phone. By 2025 Australia has a mandate to achieve more sustainable packaging. This data helps businesses validate their goals on sustainable packaging. The KoolPak has a larger interior capacity than an equivalent sized EPS box, as the EPS box has thicker walls, while also having airline approval for 25kg which is 25% more than an equivalent sized EPS box. A strong focus on environmental credentials and the product being both recyclable and designed for re-use has a significant economic benefit for the user. In-market testing indicates KoolPaks can easily be re-used 10 times; some trials have re-used boxes more than 20 times. The flat pack design offers additional savings by minimising transport costs and storage space required for empty boxes between use.

Everything Connected Online and Offline for a Positive Future

NFC technology allows Sheep Inc. to track their products, ensure their authenticity and create an opportunity to engage with consumers regarding origin of product, matching recommendations, and recycling initiatives. With all the information provided online and offline, this fashion brand attempts to make their customers become environment-conscious with a great effort by using NFC technology to create a unique customer experience. SAG is proud to play a role for Sheep Inc. by providing this waterproof and robust NFC tag made to survive daily use in all conditions and help spread the message of bringing a positive future. 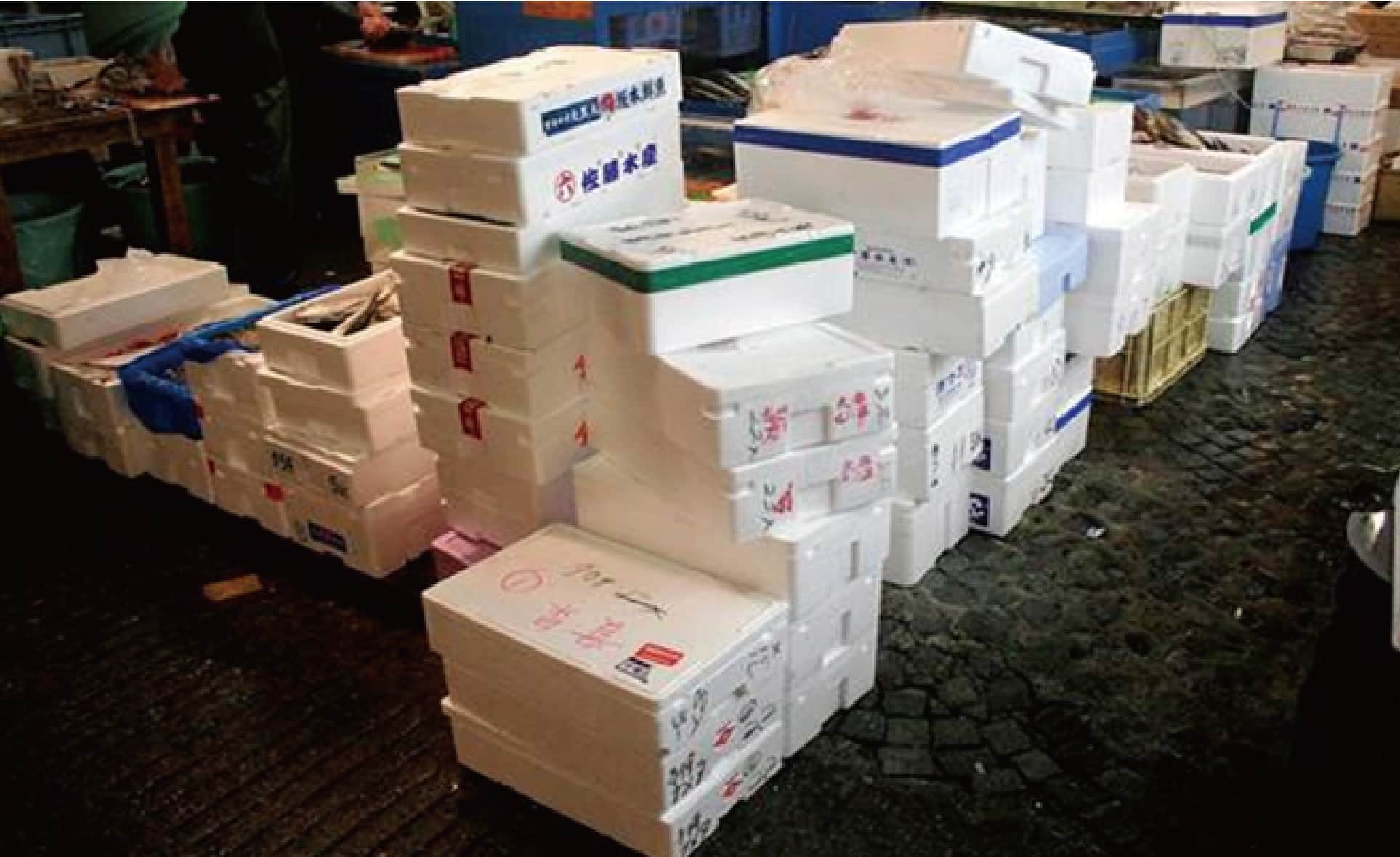 THE ACTIVITY INVOLVED OTHER USERS OF THE ENVIRONMENT

From fish to pharmaceuticals, chicken to chocolate and beef to berries, if it is temperature sensitive or perishable it will require the product to be kept fresh and safe. So, the problem faced, is not just limited to the seafood sector. The KoolPak has brought together a range of users and manufacturers with a single vision to create a sustainable alternative packaging system. As fishers, Tom and Kath initially looked to target the seafood industry, but the KoolPak goes beyond seafood. They quickly realised that the KoolPak has benefits for every sector which meant the KoolPak could have a much greater role, orders of magnitude greater, in removing polystyrene and single use plastics from the environment.
The production and transport of food is a major global industry, and it is projected to grow strongly in Australia over the next 20 years as export capacities expand. In 2018, more than 23 million tonnes of foodstuffs worth $42 billion based on farm gate values passed through the Australian cold food chain. The TomKat KoolPak® is designed to assist producers deliver their products fresh and safe, and with the KoolPak App, they can also prove the provenance of their produce.
Spill over environmental benefits can also be attributed to the KoolPak for other sectors. Transport logistics have considerable environmental impact in the use of fuel, and emission of greenhouse gases. Existing polystyrene packaging is inefficient to transport to customers before they even use it. KoolPaks can be delivered by the pallet, flat packed for efficient transportation. Each pallet holds up to 140 KoolPaks which is approximately three times as many boxes as an equivalent sized polystyrene box or other option which is not flat packable. 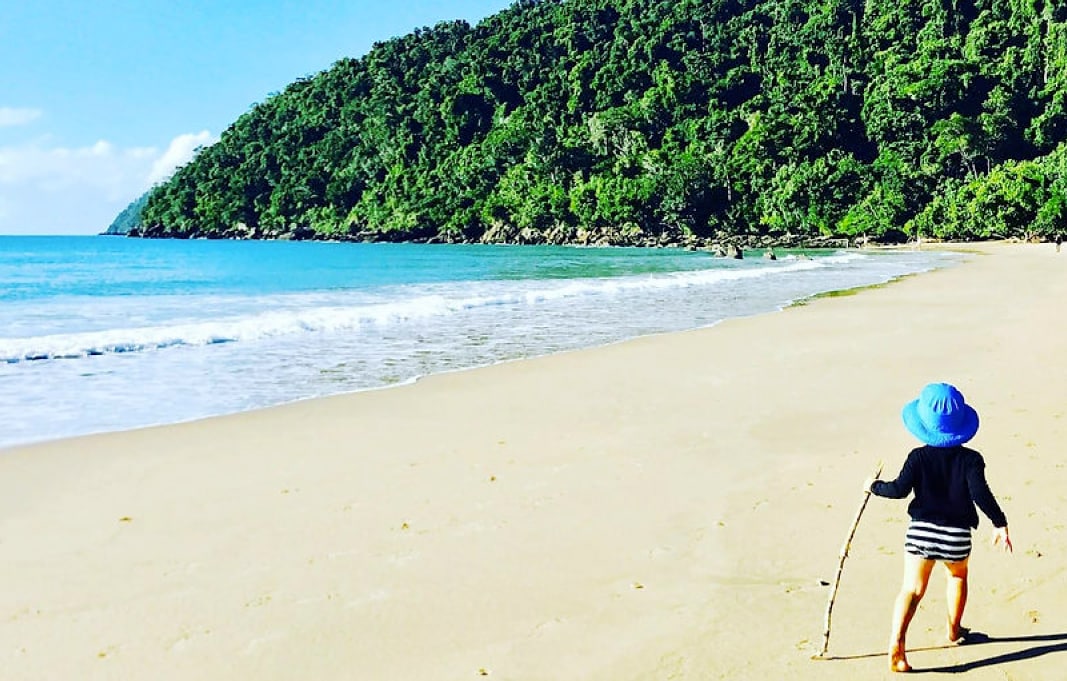 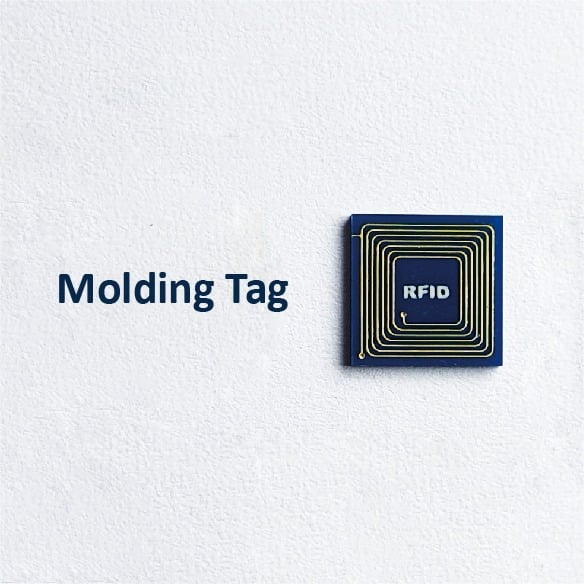 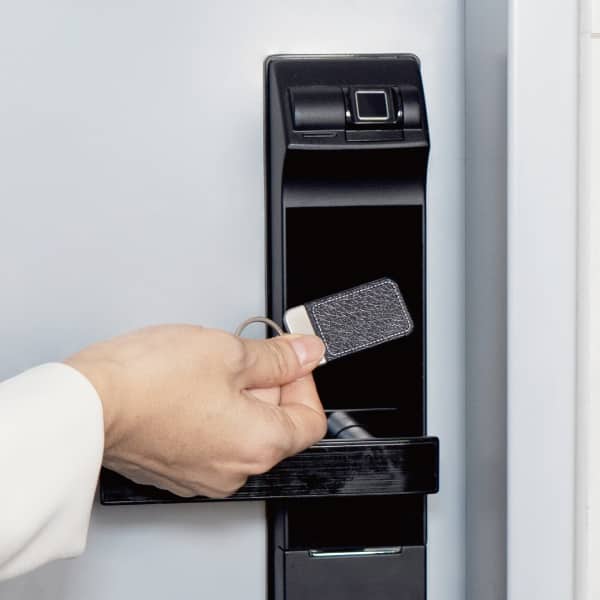 Coupling with your symphony of taste

This website uses cookies to improve your experience while you navigate through the website. Out of these, the cookies that are categorized as necessary are stored on your browser as they are essential for the working of basic functionalities of the website. We also use third-party cookies that help us analyze and understand how you use this website. These cookies will be stored in your browser only with your consent. You also have the option to opt-out of these cookies. But opting out of some of these cookies may affect your browsing experience.
Necessary Always Enabled

Any cookies that may not be particularly necessary for the website to function and is used specifically to collect user personal data via analytics, ads, other embedded contents are termed as non-necessary cookies. It is mandatory to procure user consent prior to running these cookies on your website.